October 20, 2015 local activists reported that Russian air strikes on the Syrian town of  Sarmin  in Idlib province that killed at least 12 people. According to these  reports, the Russian Air Force bombed the field hospital Syrian-American Medical Society (SAMS). According to the group, it was the ninth such bombing since the beginning of Russian air strikes on September 30. Ministry of Defense of the Russian Federation (RF MoD)  published on Twitter   and on its website  a statement that the hospital “does not have any damage.” In support of this statement the Russian Defense Ministry released an aerial photograph of the area, allegedly shot after more than a week after the announcement of the air strike, October 31, 2015. 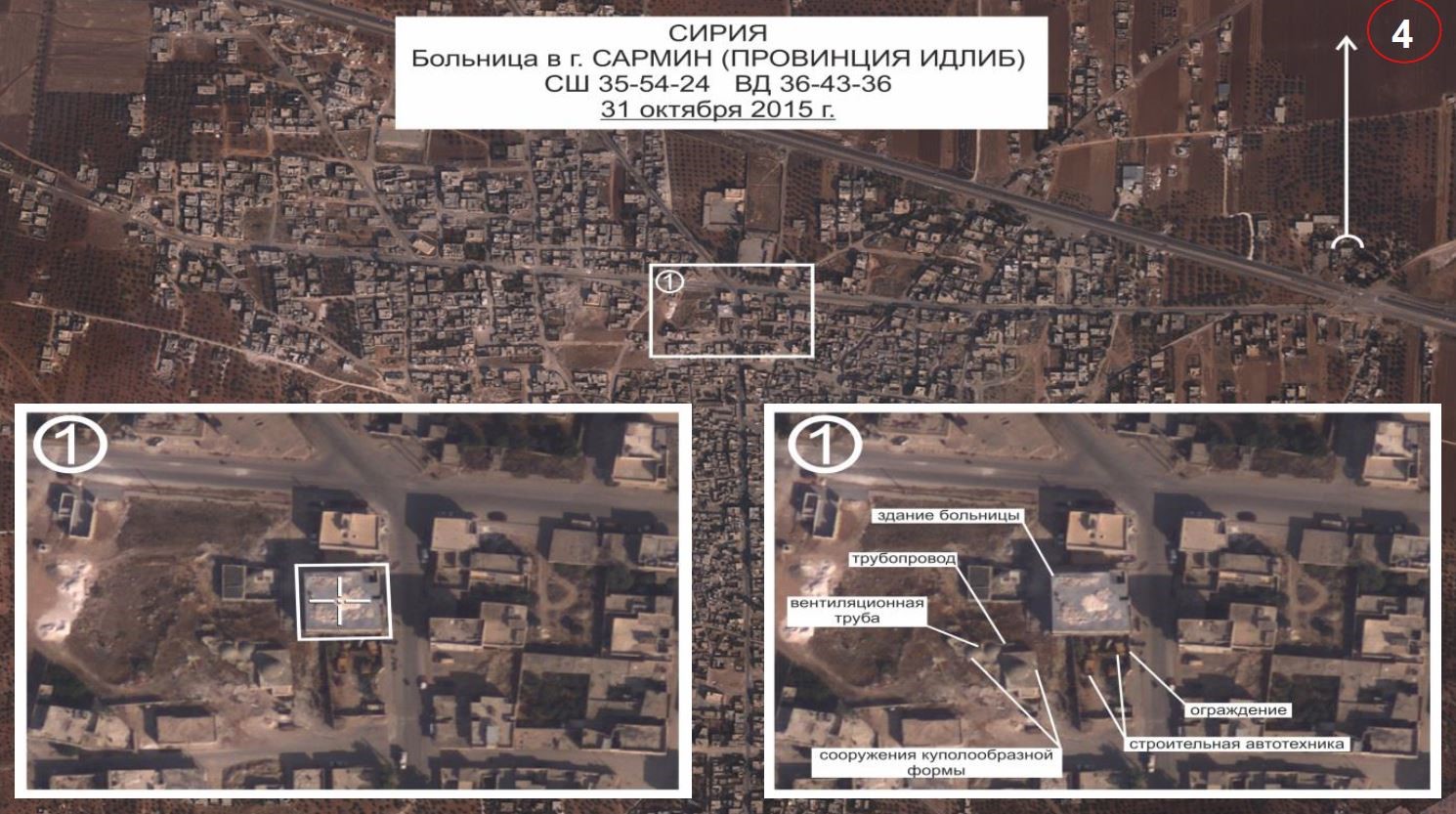 Increased air photo element, which indicates the position of the hospital building and other distinctive elements, the Russian Defense Ministry compared with  screenshots from the video  released “Radio Liberty» (RFERL), which, as described, are the ruins of the hospital:

This statement – that the picture of “Radio Liberty” represented not a hospital – true. However, with the help of open source we have been able to establish that the Defense Ministry  has once  again  presented incorrectly dated images to hide the fact of the destruction of  the  school, about 60 meters from the hospital during an air strike on October 20 and which is depicted in the picture “Radio Liberty”.

First, the Defense Ministry have correctly entered the hospital for an enlarged section of an aerial photo. Analysis  of the video, carried the Russian Defense Ministry and the following next to the enlarged member is faithful:

However, this place Oct. 20 yet undergone two air strikes, the first was in school, which is purely by chance was on the edge of the enlarged image element Defense Ministry. We managed to find a few elements of the image of the Russian Federation Ministry of Defense, do not correspond to the real picture of the devastation that day.

In this video report, which, according to the journalist, was recorded in just half an hour after the air strike, there are pictures of its consequences: 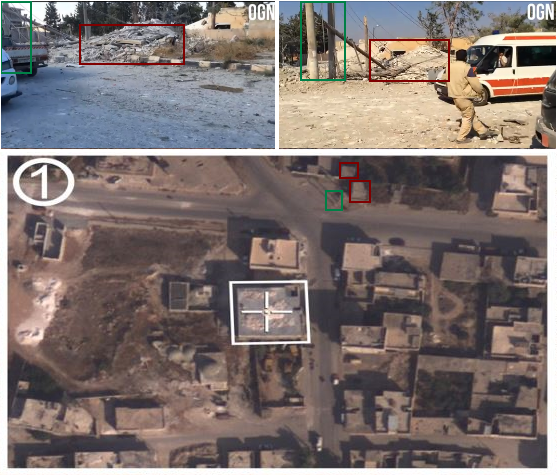 It is much easier to see the destroyed fence of the school. The picture shows the Russian Defense Ministry, he looks intact. 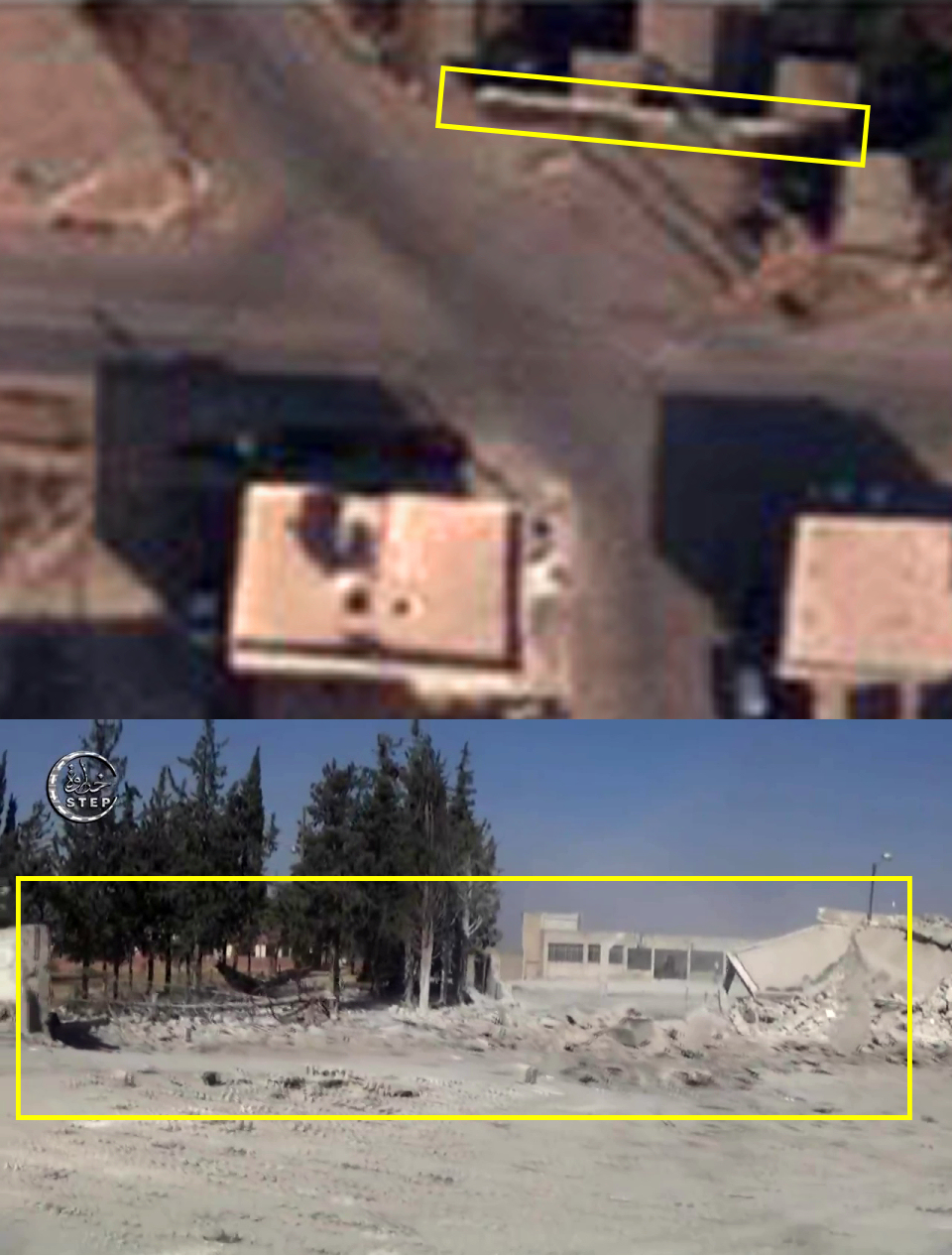 Here the fence after the first air strikes marked in yellow. Also note the building, highlighted in green (the source): 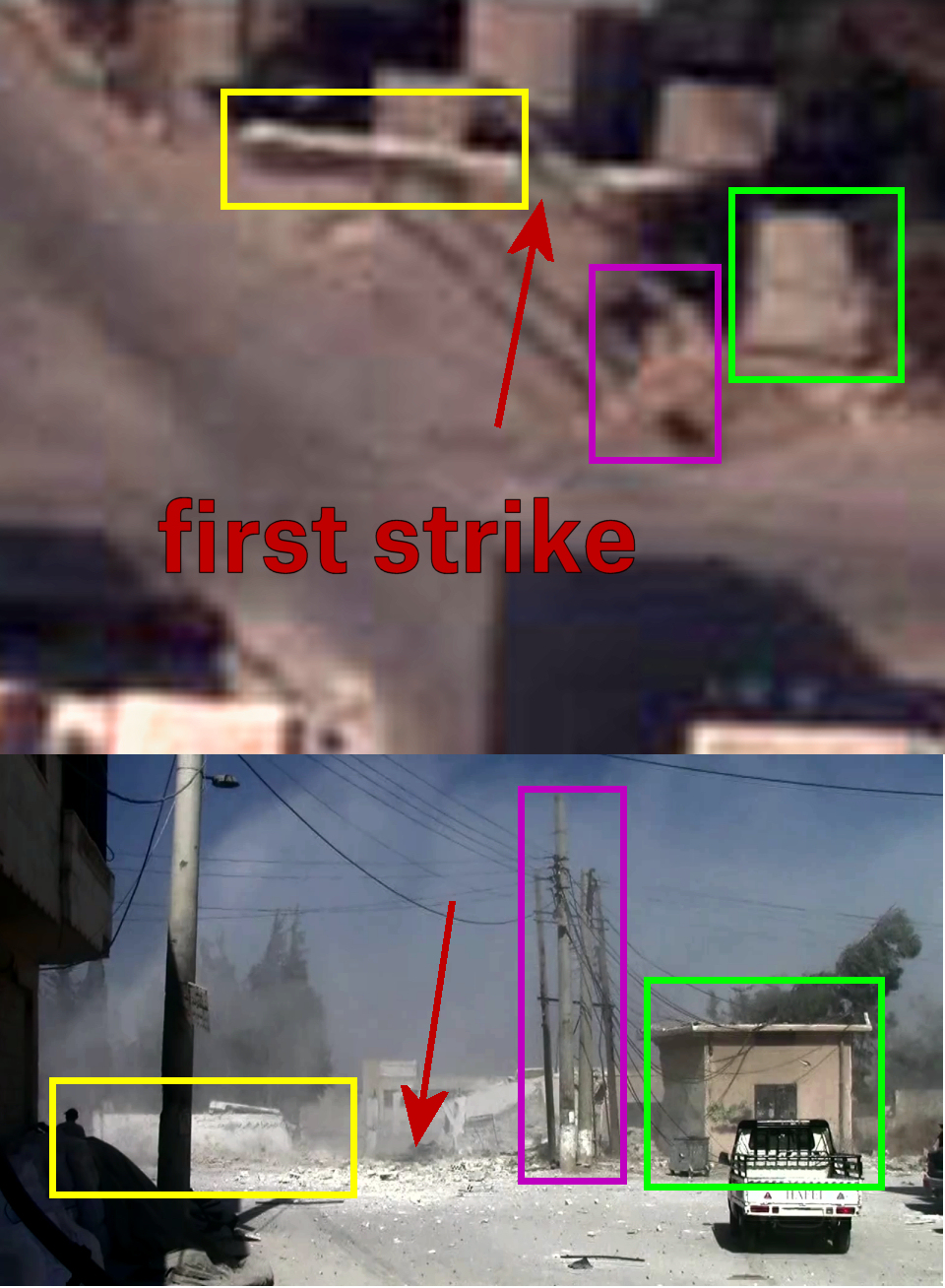 But the fence and adjacent buildings after the second airstrike (frames which can be viewed  here): Shooting time can be specified with the help of satellite images of Google Earth. The most recent available snapshot was taken August 25, 2014 Since then, to the west of the hospital were built new buildings that can be seen in the photo Russian Defense Ministry. Thus, it was made after 25 August 2014 but before the day of October 20, 2015

Finally, although the airstrike and did not come directly from the Hospital SAMS, it clearly   got damage, as evidenced by footage from the scene: Thus, the statement of the Russian Defense Ministry that the Russian Air Force has not destroyed the hospital in Sarmin, true, but this is true in the statements of Defense ends. Russia’s Defense Ministry has provided aerial incorrectly dated to hide the destruction caused by air strikes on October 20, during which, according to local residents, killing at least 12 people.

Author: Nathan Patin with the participation of a team of investigative Bellingcat and  Conflict Intelligence Team. 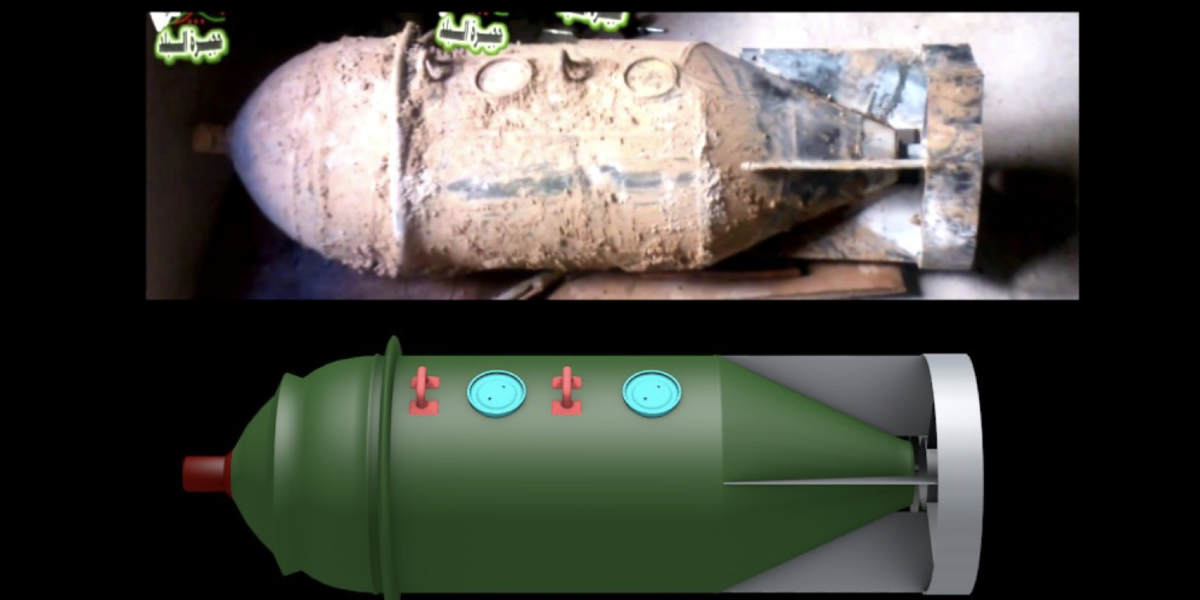